Joy and I spent the first week of July hiking along Hadrian’s Wall. It’s a major Roman achievement, though seriously under-appreciated (and not well known) by most Americans.

What the Heck is Hadrian’s Wall?

Hadrian’s Wall is a 73 mile long Roman stone wall that stretches across Northern England (from the North Sea in the east to the Irish Sea in the west). Roman emperor Hadrian ordered the wall built (between 122 and 126 AD) at the northern frontier of the Roman Empire as a border control/defensive wall against those nasty clans to the North. The wall was once about 15 feet high, had forts that housed 500 soldiers every 5 miles, “milecastles” (small forts) every Roman mile, and two sets of turrets spaced between the milecastles. The Romans followed this strict layout, even if it meant they were building the wall (and forts) right on the edge of tall cliffs. Even though there were some “doh” aspects to its layout, it’s an amazing architectural achievement. 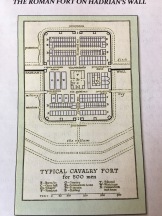 Much of the wall and the various forts still exist, though much destroyed as a result of ~2,000 years of neglect as well as stonework pillaging to build houses, churches, field walls, etc. Most of it has never been excavated so there’s lots of archaeology to do.

Unlike our Sicily trip where we constantly wished we had an archaeologist along to explain the piles of stonework we were seeing, we were lucky enough to travel with Jennifer Tobin, an archaeologist who specializes in Greco-Roman (archaeology, not wrestling). She’s particularly knowledgable in Roman military history. In one of those “It’s a small world” twists, Jennifer and I were Stanford classmates. Even though we were both English Lit majors and graduated the same year, we didn’t know each other.

Just to raise the coincidence factor, one of our fellow trekkers also has a mutual Stanford connection. She is good friends with a colleague of mine from my Stanford IT days.

One of the benefits of traveling with an archaeologist is that they always know where the penises are. Remember that we were visiting forts housing a lot of soldiers so, of course you would see a bigger collection of Roman dicks than normal. Mostly because the Romans considered a phallus to be a good luck symbol, rather than because “boys will be boys.” Though there was likely some of that. By the way, according to a friend who is a professional book editor, the plural of “phallus” is “phalloi”.  Now you know. 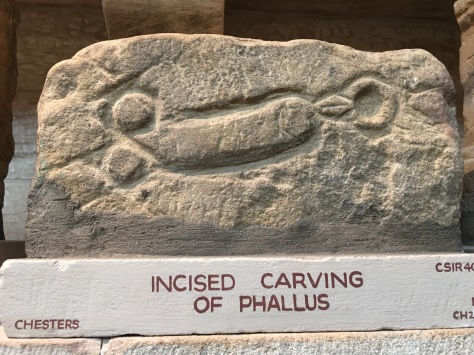 unsure what that ring thing is 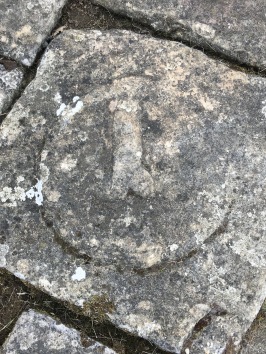 This one pointed due East

This trip was organized by our friend Mary Dell, who owns Far Horizons, a tour company that specializes in fascinating cultural/archaeological trips to amazing places. We’ve been to Egypt, Cambodia, Laos, Guatemala, China, Turkey, Jordan and a bunch of other super-cool places with Far Horizons. There were 11 of us in the trekking group.

Our adventure included a few days of nine mile hikes, though most days were shorter. Walking uses different muscles from cycling so at the end of most days, while Joy and I weren’t saddle sore, our feet were pretty tired.

Hiking along the Wall means following public access paths that take you through private farmland – most of it sheep pasture. There are two key characteristics of walking along these footpaths: sheep shit and stiles. Lots of sheep shit. And lots of stiles. Stiles are gates or ladders that allow people to pass through or over fences (or walls) while keeping animals secured in the field. Gate-style stiles (see what I did there?) usually require some kind of manipulation that is too complex for dumb herd animals (like cows and sheep) to figure out — and every now and then, too hard for us to figure out, too. 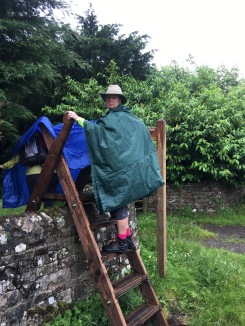 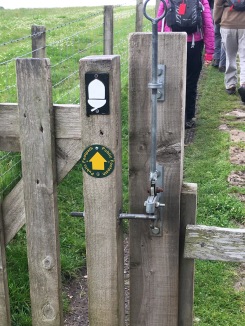 Summer hiking in England means that it rains most days rather than every day. Our first day was a doozy. We all donned rain pants and ponchos and trudged along the wall, trying to avoid sheep shit and deep mud. By the end of our first day we were all trudging along in sodden, muddy boots, hair plastered down to our skulls. It was awesome. 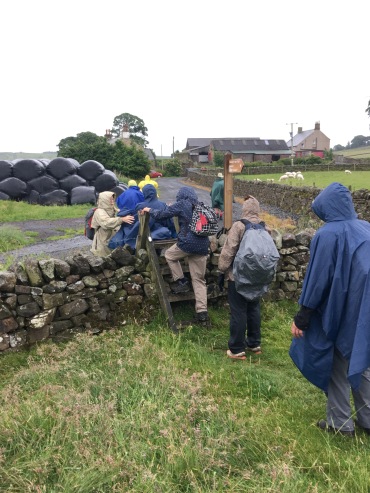 There is no evidence that the Romans asked the Scots to pay for the wall. I’ll just post this one cartoon and leave it at that.

Now we’re headed to Scotland to explore the Orkneys for a week. Then we’ll be flying back to Texas to begin a multi-week car driving trip through the western states that gets us to Oregon in time for the full solar eclipse. And then a brief Bay Area visit.

… and, yes, we still need to write posts about our Spain and Sicily adventures.