At 3am we were awakened by the sound of rain pounding on the roof of the B&B. I rolled over and hoped that the, “rain, rain would go away” because I really didn’t want a repeat of yesterday’s soggy ride.  It didn’t go away — at least not at first. Fortunately, we started the day by visiting the Kerry County Museum. This is an excellent museum, crafted and curated with new sensibilities that make the exhibits interesting, engaging, and put them in both historical and present day context. The museum had a great special exhibit about one of the key players in Irish independence: Roger Casement (look him up). The museum had also converted the entire basement level into a walkthrough diorama of what the village of Tralee looked like in medieval times. Kind of like an educational version of Pirates of the Caribbean.

By the time we walked out of the museum the rain had turned to scattered showers intermingled with deceptive stretches of sun. We only got sprinkled on a few times during the day. Today’s ride itself was boring. No interesting scenery as we veered away from the coast a bit. On the other hand, it was also astoundingly flat, which we appreciated as it allowed us to stay ahead of the rain.

Before coming to Ireland we both fully expected meals to be a pretty boring selection from a bland set of dishes. Akin to eating English food. However, we’ve been pleasantly surprised at how good the food has been. Lots of good seafood prepared in interesting ways. Even traditional dishes, like lamb and beef pies have been quite good. Several B&B owners have mentioned in passing that restaurant quality has really gone up in the last twenty years.

Even so, there are a few things worth noting.

The Irish love brown soda bread. So do we. Sometimes it is exceptionally good. It’s surprising how disappointed we are when it’s just “okay.” It seems that every meal includes a slice of soda bread. We would each be several pound lighter without all that delicious bread.

Irish breakfasts in B&Bs are remarkably similar. And huge. The “full Irish breakfast” is an efficient way to eat all of your caloric daily requirements in one sitting. And a butt-load of meat. I’m disappointed that oatmeal/porridge, which I happen to really like, rarely makes an appearance on the menu. (And only once was it steel cut.) 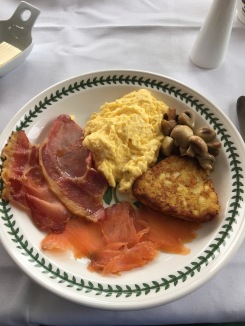 Enough for the two of us 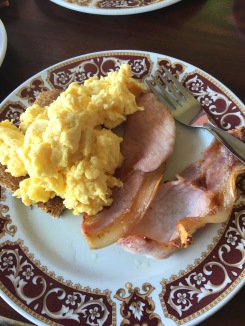 A ton of scrambled eggs

After lots of empirical evidence, I have concluded that the Irish are unaware that chips (“fries” to us Americans) are made of potatoes. This is the only explanation I have for why we so often get served a dish with chips AND a potato dish: 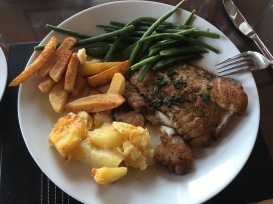 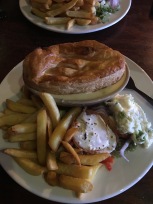 One thought on “Cycle Ireland Day 18: to Ballybunion”