Today was another great day, and, in some ways, likely to be one of the most memorable. It includes “that climb” and a boat ride out to see a UNESCO world heritage site.

Our ride again took us along beautiful Irish coastline, including a long stop at the Kerry Cliffs, self-touted as the most beautiful cliffs in Ireland. They are brag-worthy.  The highlight (and highpoint) of the ride was climbing up Coomanaspic. Regarded as one of the toughest road climbs in Ireland, it’s officially graded as an A1 climb by Cycle Ireland.

Yesterday, a waitress hearing that we would be riding up this hill warned us, “Ooh. That’s a steep one, alright. I usually drive most of that in 1st gear. And, It’s going to be very warm tomorrow – all the way up to 19 degrees. You should bring plenty of water.” (BTW, if you’re American, 19 Celsius is a whopping 66F!) Actually, it turned out to be a lot hotter than that. With the heat radiating off the tarmac, Joy’s Garmin registered a high of 84.

It was a freakin’ steep climb. According to Strava (cycle tracking software), it shows that at one point the climb hit 17.4%! Even leaning as far over my handlebars as I could, the front wheel actually came off the ground a few times! I’m proud to say I rode up the whole thing. Just slower than most folks (34:09 minutes vs 7:14 for the fastest). But those people don’t ride it with 35 pounds of gear in panniers.

Today started off on a bad note when we realized that I had somehow lost one of my two water bottles.  This was bad news given today’s steep, hot climb. Fortunately, during a morning pit stop, we discovered bottles of Powerade at a big, fancy gas station . We never, ever saw Gatorade/Powerade in Spain and we hadn’t encountered these drinks here in Ireland, either.

We ended today’s adventures by taking a boat excursion out to see Skelling Michael Island. Monks who really wanted to get away from it all established a Gaelic Christian monastery here around the 6th century. An inhospitable rock, they survived on fish, bird meat, and eggs. Somehow, the monks managed to build pretty amazing structures, including terracing, breathtaking stone staircases, and beautiful stone-based monks’ cells in the shape of beehives. Now a UNESCO World Heritage site, it seems that now it’s best known for the last three minutes of the Star Wars film “The Force Awakens”, when we finally get to see Luke Skywalker. Sadly, we didn’t get to land on the island because we are one week too early. But our B&B’s bar is where Mark Hamill hung out. 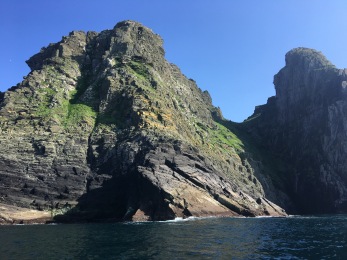 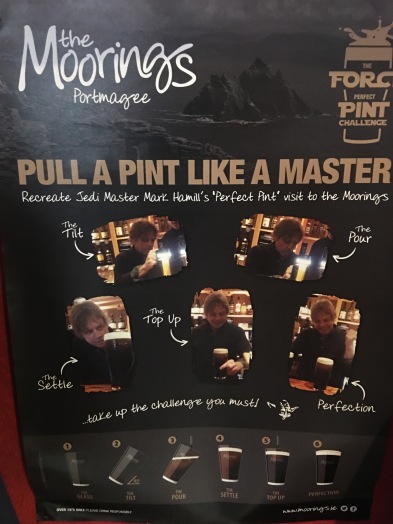 The Froth is with you!