Today was another great day cycling Ireland’s west coast. Although we were disappointed that yesterday’s sunny skies didn’t return, we didn’t mind the overcast skies since it was simply chilly, not cold. Even better, we had no wind buffeting us around.

We noticed that as we left one peninsula for the other that the terrain became much less dramatic. The jagged cliffs and crashing waves gave way to soft-shouldered coastline and muted green foliage. Instead of farms we saw rugged fields with small flocks of sheep, many of them spray painted with color coding to help farmers identify and reclaim wayward sheep. Sometimes sheep had numbers painted on them. There’s an obvious joke to be made here, but it turns out that it’s a way for shepherds to quickly reunite lambs with ewes.

No archeological site today, but we did stop to visit the memorial garden and sundial that honor the memory of the 329 victims of the 1985 terrorist bombing of Air India Flight 182 which crashed into the Atlantic while in Irish airspace. 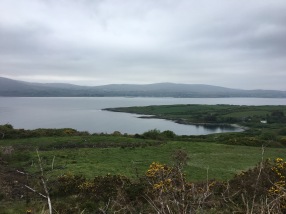 Following all the nooks and crannies

We are once again staying in a B&B, though as with last night’s B&B, it should perhaps be described as a B&B&D. The villages are so small that the B&B serves as one of the main dinner restaurant options. I enjoy B&Bs because we get a chance to talk to the owners and learn a bit about their families and the history of the house and village. I’m enjoying the vibe of the villages and intrigued by the idea of living in a village one day.

We stopped at a pub for a tea break (really, just tea) and chatted with the locals sitting at the bar. We even heard two bar jokes, which, by definition, are inappropriate:

The population of that town has remained constant for years. Every time a woman gets pregnant, a fisherman skips town.

I’ve got low self esteem. I attended Catholic school for 16 years. Not once did a priest make a pass at me.