This is a continuation from Climbing the Sierras – Part 1.  (This post is long and somewhat torturous, which is fitting.)

On Friday, May 6, our goal was to ride 22 miles with roughly 3,500 feet of climbing to Bear River Lake Resort. Mileage-wise, not so long, but a challenging climb at altitude. We were extremely anxious to reach the resort because we wanted to hunker down in a hotel room while a big multi-day storm made its way through the Sierras.

As daylight struggled to make its presence known through the rainclouds, we lay in the tent and listened to the beat of the rain on the tent. Was it slowing? Was it stopping? Was the rain just catching its breath before beginning again?  Would we take down our tent only to spend the whole day riding in the rain? Without the Internet to guide us, we had to guess. Deciding we would only regret delaying our start, we decided to go for it. I put on my rain gear and covered my panniers covered in their rain jackets.

The day’s climb was steep and steady. The clouds periodically toyed with us by sprinkling for a few minutes and then pausing for a while. Each time I saw a car coming towards us with its windshield wipers going I braced for the oncoming downpour. It got colder as we climbed. The patches of snow we were seeing sporadically at the beginning of the day were becoming larger and more constant. I was sweating but my fingers, toes and knees were cold. During the course of our ride we passed both the 5,000 and 6,000 foot elevation signs. Major milestones! The sky was threatening at 5,000 feet but it was still mostly dry.

And then it began to rain. The rain was cold and we could see our breaths as we huffed and puffed and climbed the road at about 4mph.
(click the link to watch the video)

About a mile past the 5,000 foot mark we passed a snowplow parked by the side of the road, the driver sitting in the cab having a cigarette while he waited for the call to get to work. This was a bad sign. We really didn’t want to be riding in snow. Aside from increasing the physical unpleasantness it also significantly raised the risk of accidents.

Before we reached the 6,000 elevation sign the rain turned into a driving mixture of rain and sleet that really hurt when it hit us in the face. We weren’t wearing sunglasses and we had decided against wearing our balaclavas under our helmets because they interfered with our ability to hear cars and trucks coming up from behind. The downpour was strong enough that it was difficult to keep our eyes open. Even having switched to full finger cloves, my fingers were stiff from the cold. My feet were freezing and my toes long ago stopped aching and had just gone numb. Everything, including my knees were cold — except for my quads and thighs which were on fire from all the pedaling.

We began taking more and more frequent breaks, but each time we started up again, our legs screamed at us. And then we saw the sign for Bear River Lake Resort and knew we’d made it. Twenty minutes later we stood in the office, making two big puddles, while we booked a room for two nights. The woman at the office was gracious and welcoming, even though you could see her thinking, “You’re cycling in this weather? Are you two freaking nuts?”

We spent our rest day in the bar, drinking with the locals and watching sports. Unfortunately, the Giants game went into extra innings and overlapped with the Kentucky Derby. One of the regulars really wanted to watch the Derby and kept hounding the barkeep to switch channels. The barkeep, a rabid Giants fan, was reluctant to miss any of the baseball action so would only periodically switch over for a second to see what was up with the race. (The word “Tivo” kept coming to mind during this whole 30 minute period.) Although I’m a big Giants fan and was definitely interested in the game, there are 162 of those a year and only once-yearly do you get “The two most exciting minutes in sports“.I think only Joy and I saw the irony of missing the first 30 seconds of the Derby because the barkeep didn’t want to miss any action from one of sport’s slowest games. At least we got to see the end of both events.

Riding to Kirkwood and the Summit

On Sunday, May 9 we headed out for Kirkwood, a ski resort just 6 miles from the summit. It was either do a 21 mile ride (2,900 feet of climbing) to Kirkwood and spend the night before tackling the summit or push on to the summit and then the long descent to Carson City, Nevada. The second option would have been 80 mile ride – too much climbing and too far for us to do in one day, given that Carson Pass is at 8,574. 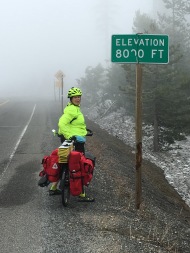 Summit day was clear and bright and a welcome change from the very thick clouds that made the previous day’s climb that much more daunting. As we climbed that day I dreaded seeing two specific roadsigns that had taken on a very different meaning over the past few days: Turn Out 1/4 mile and Passing Lane 1/4 mile. When we had a BMW sports car I loved those signs because it meant I would be able to pass. Now these signs just meant a section of road that was even steeper than what we were currently riding and the road engineers had made accommodations for that steepness by giving motor homes and trucks a separate lane to strain their way up the road.

We had dedicated our Sierra Climb to Elizabeth Plageman and her husband. As I groaned and ached and shivered, I thought about them a lot. Our suffering was ultimately really not that bad and the kind of pain that goes away with a rest day and a good beer. I was surprised how often when I was feeling miserable for myself, and wondering why I hadn’t suggested a San Francisco to Los Angeles tour, that thinking about dedicating our ride made me feel better and willing to continue on.

Kirkwood itself was a lovely hotel, surrounded by lots of snow but long past ski season. The ski lifts, storefronts and patios were all shut down and the whole resort gave off a forlorn look that left me feeling unsettled. The hallways, bar and restaurant, designed to support crowds of skiers, just magnified how empty the lodge was. Only a skeleton crew staffed the lodge, not enough to staff even the bar, and only a few rooms were booked. In fact, except for the young woman at the front desk, we never saw another person (employee or guest) at the lodge. Ever. Whenever Joy and I walked through the empty hallways to or from our room, I couldn’t help but think about the movie The Shinning. I decided that if we turned a corner and saw twin girls, we were sprinting for the nearest staircase.

The ride over the summit was almost anti-climatic but it was beautiful.  It was only 6 miles to the top and we were surprised when we reached it.  The ride down the other side was a glorious coast for a much of it.  We had been somewhat concerned about not going too fast but headwinds (curse you!) kept us at a maximum speed of 44.5 mph. It was a long day, mileage-wise (53.6 miles) but it was great to have the Sierras behind us. An awesome achievement and I’m so proud of what we’ve accomplished so far.

2 thoughts on “Climbing the Sierras – Part 2”