This is the first in a few posts about our cycling ascent of the Sierras.

This post contains profanity. If that offends you, you may want to skip this post (particularly the first two paragraphs).

After spending a rest day in Placerville, we headed out Thursday morning to begin our Sierra ascent in earnest. Our goal was Omo Ranch – 25 miles and 4,000 feet of climbing. The ride out of Placerville started off with a bang. The first bit of climbing we encountered was steep enough that it’s the kind of incline I refer to as a “Fuck You Hill.” As in, “Fuck You, road engineers for not doing a better job of choosing a longer and less steep route!” And because that’s what I’m muttering for putting myself in this situation.

As I climbed this roughly third of a mile, I imagined this hill as the Sierras introducing themselves to us: “Welcome, over-confident Assholes! There’s a whole lot of this kind of shit up ahead, you middle-aged, wanna be cyclists.” I’m proud that I actually rode all the way up that climb. I like to think my success was a response in kind: “Fuck you back, Sierras. I’m coming for you. Maybe slowly, and groaning like a constipated 5 year-old, but coming.” (I happen to know exactly what that sounds like. Many years ago I held a 5 year-old’s hand in moral support while he sat on a toilet and strained for success.)

Once we got past that “F U Hill” the rest of the day’s climb was a hard slog but not terrible. We saw beautiful scenery and occasionally get a vista that would let us admire how much climbing we’d done.

Although we were planning to ride only 25 miles, we were anxious to make good time. We had heard that a storm was rolling through that afternoon and we wanted to be ensconced in our tent before the rains started. We made Omo Ranch just as it started sprinkling. Our destination was not what we expected. The proprietors had set up a small store right next to their house and the campsites were not proper campsites, just open spaces in the woods behind their house. 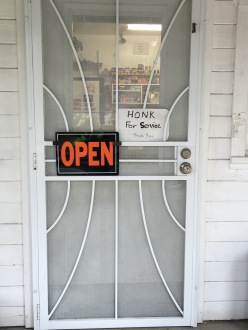 When we arrived at the campsite/store, a sign on the store front greeted us, “Honk for service.” We were baffled about what to do. We don’t have a horn. After wandering around yelling, “Hello” for a few minutes we got her attention and she opened up the store for us. For weight reasons, we carry little food and had been hoping to buy things for dinner. What a disappointment the store was. Rows of junk food, cheap beer and random camping stuff. She did have one banana, which we bought.

As we headed out the door Joy asked the proprietor if we needed to worry about bear bagging our food. Her response was, “Well, we do have mountain lions and bears.”  And then she paused to pondered for a while. “Well, given the weather, you’re probably okay.” Probably.

By the time we got back to our tent it was full-on dusk and starting to rain in earnest. And the temperature had dropped —  a lot. We decided against setting up the stove and cooking in the rain. Instead, we climbed into our tent, curled up under the sleeping bag and made a meal of Fritos and other assorted junk food. By 6pm it was pitch black outside. Because my iPhone was low on battery, I decided against reading. Normally I can get some charge from the DynaHub in my front wheel. But I have to be cycling at least 10 mph to generate enough energy for charging to occur. Given the 4,000 feet of climbing in front of us, at best we’d be doing 5mph so we wouldn’t be able to charge our cell phones until Friday night. I just snuggled up with Joy and tried to fall asleep, praying that the rain would let up so that Friday’s ride wouldn’t suck.

As I lay in the tent waiting for sleep, I began worrying about how much rain we’d see on Friday. I forgot to pack my cycling rain booties (covers that slip over your cycling shoes). My feet are always cold and I was worried about how debilitating having cold feet can be. I also worried about whether the cold temperature meant the snow level would drop and we’d be riding in snow. I worried about how much snow we’d encounter at the Summit and whether snow would be piled up on the shoulder. My cousins tell me that Navarretes specialize at worrying. My father once told me that he was worried about one of my brothers because there was nothing to worry about at the moment. I sometimes worry that I will be like him when I get older.

Here I was worrying about how much ground we could cover, food supplies, and the weather. I made a mental note to myself not to make fun of the Donners just before you start cycling up the Sierras.

9 thoughts on “Climbing the Sierras – Part 1”