In July 2014, two months after our dear friend Warren Thornthwaite died from brain cancer, my husband Tony and I had a casual conversation that has changed the focus of our lives. I don’t recall the details, though I remember we were in the car on the way to our yurt. 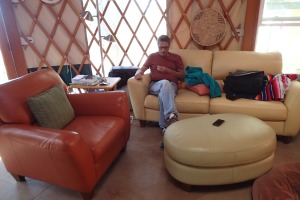 Tony made some comment about riding bicycles across the country. I responded that was actually a thing people do. We chatted about the idea for a few minutes.

To set context, Tony and I are in our mid-50s. We had never done much cycling, and I hadn’t done a serious grownup bike ride in maybe 25 years. We had been going to spinning class pretty regularly for almost a year.

As an aside, Tony confessed later that he’d been thinking about the possibility of us riding across the country for a few weeks. He held off mentioning it for fear I’d program manage the concept to death. How well he knows me!  Tony also admitted he thought it would take about two weeks before I’d have a preliminary plan in place. Turns out it was 8 days. He was counting.

Step 1 (July 2014): Go on a real bike ride. We dusted off our old bikes (Tony’s decent hybrid, my very entry level mountain bike), chose a route, and went for a ride. TBD: can we ride a reasonable distance (30 miles), with some hills? Do we feel like we could possibly do the same thing the next day? Outcome: We bought new light road bikes immediately after this ride.

Step 2: Start riding about 50 miles / week. Weekend rides are in the 30-50 mile range, 3000-5000 foot elevation gain. Sometimes we do this via spinning classes rather than real rides.

Step 3: (March 2015): Go for our first bike tour – we chose Adventure Cycling’s 1-week van-supported tour of Death Valley. TBD: How do we feel about camping and riding for a week? Outcome: We ordered new touring bikes from Rodriguez Bikes in Seattle.

Step 4: (August 2015): Use our touring bikes on an unsupported tour. We planned and executed a fabulous 2-week tour around Bali. Goal: have fun. Outcome: Increased confidence that we can do this… not just the big ride across the US, but also smaller rides worldwide.

One year and one month after our first bike ride: And then the serious planning began.

Looking forward to May 2016: There is so much to do over the next 5 months, and not just increasing our fitness for long, fully loaded bicycling. But also selling the house, making decisions about belongings, disposing of same, shutting down our work lives…  We will keep you posted!