This is a follow-on to my previous post recounting experiences interviewing for jobs.

Fast forward about 30 years after my first brush interviewing at an insurance company.

A boss I absolutely loved had left the software company where we both worked to be the head of all information technology (IT) for a national car insurance company. He asked me to lead their web and mobile application development team. It was an exciting job opportunity with a big salary and I would get to work with my old boss again. There were just two downsides to this job: it would be about a 60 minute commute each way – even longer if I did the drive during commute hours. And it was an insurance company.

The day of the interviews I left the house early to account for potential traffic jams. I arrived about ninety minutes before my first appointment, which was fine as I wanted to be cool and calm before the series of  1:1 interviews with each of the two senior VPs as well as the CEO. I was anxious to make a good impression not just for myself, but also for my ex-boss. How I did in the interviews would reflect on him as well as me.

Since it was only about 7:30 when I arrived, I decided to visit a small coffee shop across the street from company headquarters. I could have a cup of coffee and practice answers to likely interview questions. At least I finally knew what an underwriter is, but I still was pretty ignorant about the industry. I got out of the car and walked to the trunk where I had carefully laid out my suit jacket so it wouldn’t get wrinkled by the seat belt. As I slipped my jacket on I realized that I didn’t have my wallet. After a frantic search of the car I decided that I had left my wallet at home.

Several things occurred to me. First, I was suddenly hungry and had no way to buy anything. I hadn’t been hungry 30 seconds earlier, but I was now. Second, I had to cross a bridge in order to get home and didn’t have a way to pay the toll. Third, the insurance headquarters might be the kind of office building where I had to show a picture ID to get a visitor badge, which meant I’d have trouble getting past the front desk. Fourth, and most worrisome, I was just bound to be pulled over by a cop. That fact that I was driving a red convertible BMW sports car just guaranteed it. I’d have to be conscientious driving home, making sure I came to full stops, using my turn signals, and not exceeding the speed limit.

Since I didn’t have any money, and had just now realized that the parking lot was marked as 15 minute parking only, I decided to find a residential street and just sit in my car and rehearse my answers there. Getting back into my car, I chose a street at random and turned on to it. It was a one-way street that led me right to a BART station. As with all fast transit hubs, there were a lot of traffic and warning signs — more than I noticed, apparently. 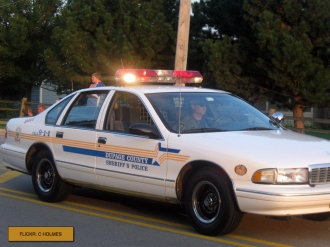 Just as I was approaching the station itself, I noticed red and blue lights flashing in my rear view mirror. Sure enough, there was a police car behind me with its lights flashing. Fuckkkkkk!

I was completely and totally screwed. I was going to get a ticket for breaking some to-be-determined law, and another for not being in possession of my ID. I also realized I’d forgotten to take off my jacket and it was getting wrinkled by the seatbelt. How ironic that I was going to walk into a job interview at a car insurance company carrying a moving violation ticket in my wrinkled pocket. So much for making sure I was cool and collected before these big interviews.

As I watched the policeman walk towards me, I decided I would pretend that I didn’t know that I was missing my wallet. Surely, I could fake being distraught at “discovering” I didn’t have it. Maybe this would make me a sympathetic character. Just as the officer reached the car, I remember whispering to myself, “Don’t get arrested. Don’t get arrested.” Why I was suddenly worried about this, I don’t know.

“Hello, sir. Did you know you are in a bus-only lane?”

“What? I am? Wow, I totally did not see that sign, officer.”

“Sorry, officer. I’m lost and was looking for a place to turn around, and I guess I just didn’t see it.”

There was a pause. I saw him evaluating me, and then evaluating the car. Then back to me. My stomach dropped as I waited for the “license and registration” request. I fought the sudden urge to fall on my sword and confess that I didn’t have my wallet. To my total surprise, the combination of a fancy car and suit turned out to be my “get out of jail” card that day.

Feeling giddy, I found a residential street and spent time alternating between taking deep breaths and giggling. After I calmed down, I took off my jacket and found time to prepare for challenging interview questions about why I wanted to work in insurance.

Each of the three interviews went better than I’d hoped, though I did experience a moment of panic each time an interviewer would ask for my thoughts on what the company’s car insurance mobile application might be like. My response always started along the lines of, “I can see how valuable something like that would be. I can think of several scenarios when you’d want to have all that information on your phone in addition to a paper copy in your wallet.”

Fortunately, there was no personality test as part of this hiring process, as I would probably still be tempted to choose the “too much insurance” option. I impressed senior management enough to be offered the job, but after agonizing over it for days, decided to turn it down. Although it would have been an interesting and challenging job with lots of financial rewards, I instead chose to join the technology group in the Stanford University Libraries. That group’s mission is to digitize, preserve and manage content and data in support of teaching and research. It didn’t pay anywhere near as well, but I did get to spend all day helping to preserve our cultural heritage for future generations of scholars and researchers. This was the last job I had before retiring, and I feel pretty good about essentially trading cash and cars for karma.