Google Map Lady, Ya Done Did Me Wrong

Imagine that I can write American Blues lyrics …

Google Map Lady, we rely on yo’ skills.

Google Map Lady, we rely on yo’ skills.

How we weep when you send us dirt roads, cobbled streets, and big hills….

For the first part of our cross country bicycle trip last year, we used Adventure Cycling maps. These are cycling-specific physical (i.e., paper)  maps that direct you to rural and low-traffic routes, highlight which towns have bike repair shops, as well as sources for food and water. And my favorite, the maps give you elevation gain information so you know if the next 80 miles are all up hill or flat. These maps were particularly important in the Western US where we were often cycling 30-40 mile stretches of wilderness between towns. Plus, there were all those pesky mountain ranges we had to climb.

Once we crossed the Missouri River our route became more forgiving. Compared to the Sierras and Rockies, the US was relatively flat. Even better, once we crossed the Mississippi we found the US much more populated, with towns never more than 10 miles apart. So we switched from the custom cycling maps to using the Google Maps application. The “bike” option does a pretty good job of routing you along bike-friendly routes, taking into account secondary (low traffic roads), steep hills, and optimizing for bike lanes. 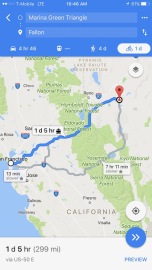 One slightly annoying thing is that the app assumes you’re on a lightweight road bike and the only thing you’re carrying is a single bottle of water. This means the app calculates time to destination based on a cycling speed of 12-15mph. Or 6mph on steep climbs. Sadly, we’re on our heavy touring bikes, and often carrying 50 pounds of gear. We typically average about 8-10mph. Unless it’s the Sierras or similar climbs and then we’re down around 3-4mph.

When It All Goes to Hell…

To be fair to Google, the map application explicitly points out that the bike option is beta and may not always be accurate. By and large, it’s been really great. Especially so in places like the US and much of Europe.

Even so, Google Map Lady (GML) has a few particularly annoying tendencies.

GML will often route us in torturous routes, sometimes miles out of our way, in order to take advantage of official bike lanes or paths. Even if that bike lane only lasts several hundred feet. I can’t tell you how often one of us has vented, quite vociferously, when she does that. Or she will opt for a steep shortcut over leaving us on a road with lots of traffic. Sometimes this ends up with us walking our bikes up steep pedestrian paths. Or stairs.

Much more annoyingly, Google Map Lady doesn’t reliably distinguish between pavement and dirt roads. Several times we’ve been following along a totally fine route and had Google Map Lady tell us to turn onto a road that would cause you to have second thoughts if you were driving a car. Dirt roads can be just torturous on a bike. Whenever her instructions surprise us with a dirt road, my typical response is:

These are examples of “inadequate” cycling roads. 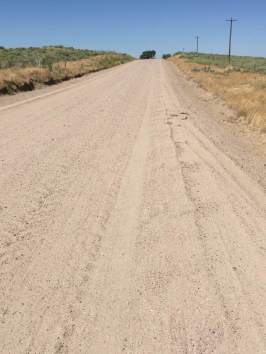 dirt so soft we couldn’t ride 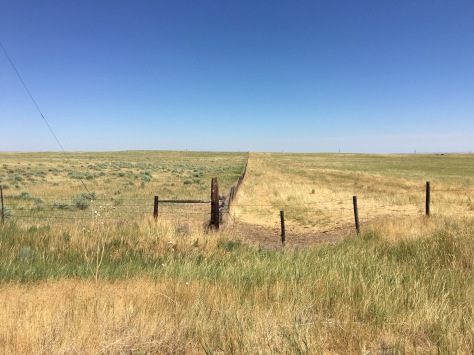 GML thinks this Wyoming fence is a road

Although the penalty for poor routing wasn’t usually too bad when we were crossing the US, the pain of dealing with poor directions in Europe is considerably worse, particularly in Spanish hilltop cities. The height of exasperation is trying to cycle along centuries-old cobbled streets – which are super steep and narrow. Cycling those streets just totally sucks.

I can’t tell you how often I’ve wanted to fly back to the Bay Area, walk into Google headquarters, and throttle all the engineers who have-worked-on or are currently working on the bike route option in Google Maps.

Here is a video that is a compendium of serendipitously captured GoPro footage of some of the tough spots Google Map Lady has put us into.