Jointly written by Joy and Tony

We spent two weeks in Morocco. We rode our bikes to Tarifa, Spain (just west of Gibraltar) and took the hour-long ferry to Tangier.

We had planned to cycle around northern Morocco, occasionally leveraging trains to get us past the hard cycling between cities we wanted to visit. It turns out cycling in Morocco was a total bust for us. Google maps doesn’t have data for bike route options in Morocco. It was impossible for us to determine bike-friendly routes, let alone examine and plan around elevation gain. Also, Moroccan trains don’t offer bicycle service. We would have had to pack up the bikes as if they were cargo and even then, not all train routes provide cargo cars. We ended up leaving our bikes in Tangier and picked them up two weeks later when we headed back to Spain.

People do bicycle tour in Morocco, and we read lots of blogs of successful trips. We’ve gotten into the habit of “winging it,” which would not work (for us) in Morocco. It’s possible we’d return someday to bicycle Morocco, but if we do it will be a thoroughly researched and planned trip. This was an important lesson learned: challenging locales need planning! 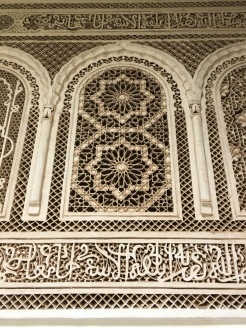 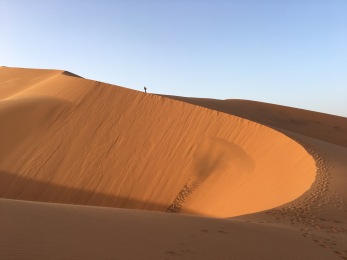 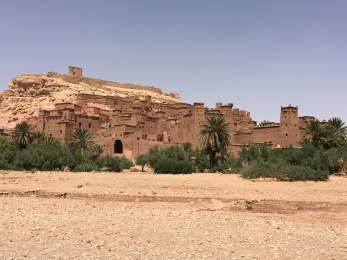 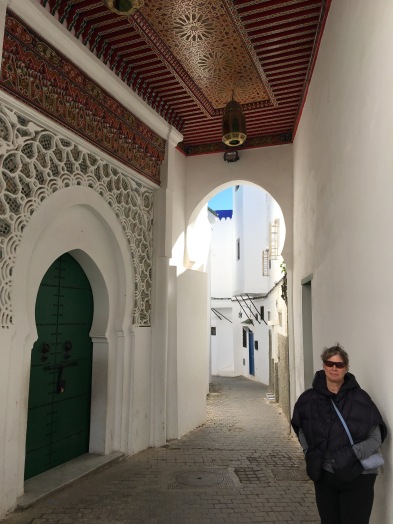 Riads – amazing sanctuaries from the bustle

We stayed almost exclusively in Riads during our Morocco trip. A Riad is a traditional Moroccan house built around a courtyard or patio with a fountain. The building is nothing from the outside–often not even windows–but once you walk in you’re in a beautiful, tranquil space. Of course, many riads have been converted to small hotels. They all serve breakfast, uniformly great (and large). Most also serve dinner upon advance arrangement, which is where we had the best food on our trip.

Even the most deluxe riad–which was pretty darned luxurious–was barely $100/night, though we were a bit early for peak season. Still, prices were amazing.

Moroccan food can be excellent. The challenge is that the cuisine seems to follow a pretty narrow path. We ate a lot of tajine. Named after the conical earthenware pot in which it’s cooked, tajine is a slow-cooked stew of meat, chicken, or fish that is mixed with vegetables like zucchini and carrots and then seasoned with spices like cumin, cinnamon, and saffron. Though the flavors were awesome, it got tiresome. It also got boring eating super mushy vegetables, which also made an appearance in couscous. We ate a lot of couscous, too.

One of our favorite dishes is a lentil & chickpea-based soup called Harira. Mostly served during Ramadan, it’s accompanied with dates and lovely swirly cookies covered in sesame seeds.

The Moroccans have a love affair with bread. Particularly at breakfast. We typically had 4 or more kinds of bread dishes served at breakfast. Most of them were really good, but we weren’t cycling so carbo-loading every morning just seemed over the top. There were bread shops and cookie shops everywhere. At one point on our trip, Joy and I had eaten cookies twelve days in a row. Twelve!

And tea. Everywhere we went, we were served freshly brewed hot mint tea, already heavily sweetened and poured at arm’s distance from the teapot into tiny glasses barely bigger than a large shot glass, the long stream making a wonderful sound (unless you already really needed to pee). The tea is served so hot that even holding the glass by the rim, it burns your fingers, so you wait for that magic moment when the tea is still hot enough to maximize the flavors but not so hot that you feel every inch of the scorched path down to your stomach.  We drank tea five or six times each day.

Because Morocco is a Muslim country alcohol wasn’t readily available (a sharp contrast from Spain!). Our second night in Tangier Joy used Trip Advisor to find recommendations for the nearest bar. Turns out the closest ones were all in Spain – just a 60 minute ferry ride away!

In Tangier most Moroccans speak Arabic as well as fluent Spanish and French, and often some English. This made our initial transition easy as we could just keep using the Spanish we’d been practicing in Spain. Some signs were posted in Arabic, French, Spanish and English.

As we journeyed southward Spanish and English fell off pretty quickly while French remained the second language in museums, restaurants, etc. Luckily, we use Google Translate on our iPhones. We use the phone’s camera to scan the text and the app provides a usually-adequate translation. Good enough to know the historic importance of the items in the museum case or to understand relevant train station information.

In addition to our other 6 Arabic phrases, we now know “Yalla.” Arabic for “Let’s go”, which is one of our favorite sayings to pick up in different languages.

Moroccans were super friendly and helpful and it always felt safe, even when we’d gotten lost in the twisty passages of a town’s medina (the old walled area of towns, mazes with lots of shops and vendors). Getting lost in twisty passages is most of the fun of a medina.

Everyone we encountered on the trip was over-the-top nice. The Riad owner in Tangier was almost uncomfortably friendly and helpful. I kept wanting to say, “Okay, we really have to go now…”

On the other hand, there are a lot of un- and under-employed people in Morocco who were also always looking to “help.” Tourist areas, particularly, the medinas were rife with people looking to help “guide” you to their “cousin’s” restaurant or shop. This is no different than what we’ve experienced in many other parts of the world, but it was an interesting contrast between folks who exuberantly want to ensure everything is great and those who are motivated to make a quick dirham.

In 2017, and for some years to come, Americans are nervous about travel to the Middle East and North Africa. I encourage everyone to learn and see as much as they can about a huge variety of people and places. Especially in these times, muslim people and Islamic culture are so very demonized, not just in the over-the-top way of trumpland, but also as the cartoonish villains of TV, movies, and jokes. Tourism has unsurprisingly plummeted in most of the region. Morocco is a great place to see the people, mosques, hear the call to prayer, eat the food, and absorb a bit of the culture and history of a fascinating part of the world. And maybe learn about the culture that provided the foundation for many aspects of European and Western art and architecture, math and sciences.

“Travel is fatal to prejudice, bigotry, and narrow-mindedness, and many of our people need it sorely on these accounts. Broad, wholesome, charitable views of men and things cannot be acquired by vegetating in one little corner of the earth all one’s lifetime.”  Mark Twain, The Innocents Abroad