Today we cycled to the bottom of the Beara peninsula and back up, continuing our path along the jigs and jag of the Irish coastline. The scenery was spectacular. We started off with a nice tailwind, which felt like a giant’s hand on our backs, pushing us along.

We stopped at a ring fort that is just off the road. Ireland is littered with ring forts — like 40,000 of them — and we’ve seen several from a distance. We had to pick our way through a sheep herd to get to this one. Tony learned to watch his step, as he was cleaning sheep shit from his cycling shoes for the rest of the day. 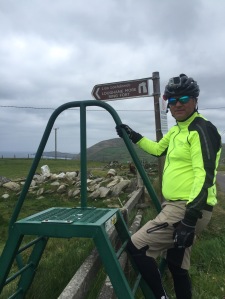 The tip of Beata peninsula is Dursey Island, inhabited by a handful of people (6), and accessed by Ireland’s only cable car. Those few people host a lot of tourists, as it’s a popular spot during the season. Which today wasn’t. Unfortunately the cable car wasn’t running when we got there, so all we got was a view of the island.

The morning wind that was so helpful turned fiendish as we headed northeast up the peninsula. The scenery was absolutely amazing, the roads were empty of cars, the sun was peeking through the clouds… all was set for an an awesome ride to our destination B&B. And yes, we expected wind. But! What had been a 20 mph tailwind turned into a 40 mph headwind (very bad, not fair), with much stronger gusts at the top of the pass. We persevered, and laid our trusty bikes to rest in the byre at journey’s end. 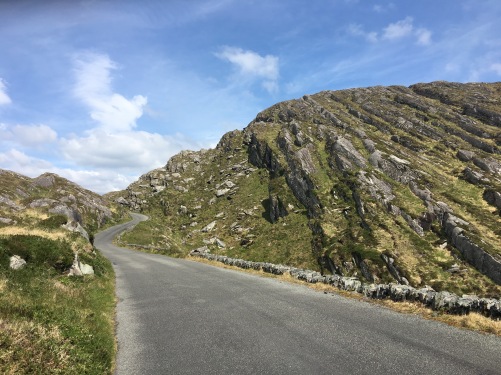 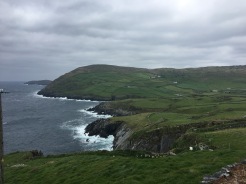 We haven’t seen very much solar or wind turbines in Ireland. It seems odd as I think of Ireland as a green country metaphorically as well as literally. Solar, ok, maybe not that much sun. But wind they have!