During the first months of our bicycle trip across the US Joy and I were averaging 45 miles each day, and we were almost always taking a rest day every fourth or fifth day. At the end of each day we would pull up to our hotel and just collapse for a while before summoning the energy to shower. Or collapse for considerably longer if we were camping and needed to set up the tent.

Now that we’re past all the mountains we’ve been averaging about 60 miles each day and often finishing our ride by early afternoon. There’s still a certain amount of, “Let me just lie here for a bit” at the end of each day, but we’re just tired, not exhausted.

Over the weeks that we’ve been cycling we’ve learned to categorize and plan for the challenges that turn a great day of cycling into a challenge. We refer to them as the Three Hs: Hills, Heat and Headwinds.

Of the three factors that can make a ride suck, hills are my preference. Mostly because hills and mountains don’t move.

Hills are a pain and grueling, but you know exactly what you’re going to get. The elevation climb is the elevation climb and it doesn’t vary. You can plan for it. You can leave early in the day or break up the climb into multiple days if it’s particularly long. And the thing about climbs is that there’s usually a descent as a reward.

Worst case, you can always walk your bike and still make progress.

Also, when you’re working hard to climb a steep hill, drivers and motorcyclists recognize you’re doing something challenging and will sometimes give you a thumbs up as they pass by.

Heat is just plain nasty. It can totally zap your strength. And it hits Joy particularly hard.

We are always using Weather Underground and NOAH to track the weather for the next few days and if it’s likely to be hot, we will adjust our riding schedule. Several times on this trip we’ve gotten up at 4am in order to get most of our riding done before noon. If it’s going to be hot we will carry extra water and Gatorade. And if the terrain and flora accommodate it, we stop for shade breaks whenever we can.

The other thing about heat is that while the thermometer may be registering 90, the radiant heat bouncing up off the asphalt road makes it even hotter. Often 10 degrees higher than the official heat. Since 85% of the time we’re riding along the shoulder of an asphalt road, we’re almost always riding through hotter conditions than the thermometer shows.

Unlike a really steep hill, when people drive by in their air-conditioned cocoon it’s hard to remember that it’s freakin’ hot outside, so we’re less likely to get encouragement when it’s hot out.

There is a corollary to heat: humidity. Now that we’re in Canada and poised to enter New York, we’ve begun experiencing serious humidity. There’s a saying, “It’s not the heat, it’s the humidity.” We’ve been finding that higher humidity levels essentially reduce our heat tolerance by 10-15 degrees. So if it’s over 85 and it’s humid, we accommodate our riding by leaving early in the morning or planning to ride a much shorter distance that day. Avoiding the heat and humidity combination is one of the key reasons we’ve taken such a northern route across the US. 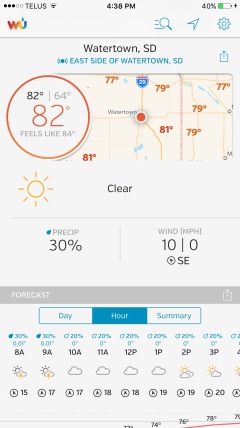 Of the three “H”s, headwinds are the most dastardly, wicked, and evil. We hate wind. Headwinds can turn what should be a mundane ride into torture. Headwinds can turn even a steep downhill into a lot of work.  We’ve experienced headwinds stealing 5-8 mph off our cycling speed. And on our worst day, winds dropped our speed down to a paltry 4 mph even though we were pedaling our hearts out.

While I’ve never cursed at a mountain or at the heat, I’ve spent a lot of time swearing at the wind. I’ve made up combinations of curses that would make Quentin Tarantino blush. I’ve been tempted to scream myself hoarse when we’re dealing with big headwinds. The wind can feel so fickle and arbitrary and it’s particularly disheartening when the winds still for just a moment before buffeting you again. During those pauses you can feel what the ride should be like. It feels like you’re being taunted:

Look at what a pleasant ride this normally is! Now pedal like hell, maggot!

The term “Headwinds” doesn’t reflect how much wind sucks most of the time. Before we got into cycling I thought of winds as only being a problem when coming right at you, in the exact opposite direction you are traveling. But winds can have a big impact when they coming from either the left or the right. Essentially, sidewinds. In fact, winds really are only helpful when they are directly behind you or almost directly behind you. The rest of the time the wind is evil.

So next time it’s windy and you are driving past cyclists, give them plenty of space!

5 thoughts on “Hell on Wheels: Hills, Heat and Headwinds”